There's code in my ... code! A common experience?

- January 16, 2020
After writing about 500 initial lines of code in designing a database schema for a web app, I realized I'd gone and added 150 lines of JavaScript code—for handling 30 lines of JSON data I'd written above that—all directly in my `.sql` file.

I often create new 'untitled' documents for temporary storage, but was curious if others might find themselves writing something completely different smack in the middle of their source? Productive tangents?

I subsequently relocated the code into its own private `HTML` file, where it can now actually be tested to see if the code runs and all...

The code took a few adjustments, but was able to run as intended. I stripped it out six hours later and streamlined the entire approach, although I wouldn't have found that streamlined approach had I not gone through the pain of initially overthinking it. I will blog the resulting coding tool within a couple days (hint: it's on CodePen).

Popular posts from this blog

Learning: Mobile App Development - via Flutter What is … Flutter? Flutter is a mobile—and web—app development framework powered by the Dart programming language. It is akin to React Native or Ionic, and is built by Google. Dart is akin to JavaScript — but not. Since coming out of beta in December 2018, trends from Stack Overflow and LinkedIn have indicated Flutter has become—and is currently— a well-developed, easy-to-use,  community-driven framework for developing natively compiled apps . It is currently used by a variety of vendors including Square, Sonos, eBay , and of course, Google also uses Flutter to develop some of  its own products such as Google Ads . Flutter 101: The Course Academind ( Udemy; Online Education ) provides over 150 high-quality courses across near two dozen topics, and is devoted to real-life success via online learning. Tagline aside, their Flutter course in point is a fine-tuned 36-hour course, and is the most detailed study program I have
Read more 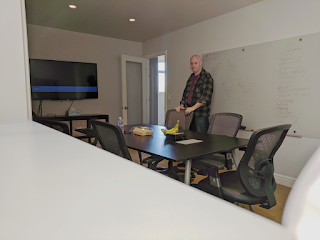 The results of teaching my first tutoring course: Background: I took on teaching this class two to three weeks prior to the class starting. I had never taken the course before. I had never formerly taught a class before. The only thing that caught me up was the second week in my correcting some misleading coding standards. I believe the end results (and comments) sum up a lot about me. I start out good , I take a slump (a learning curve to thoroughness), and I come roaring back to finish out the last half of the project with zest, and a much better comprehension of the entire situation (... and accounting for curriculum adjustments ). All in all, I believe—and hope—the students learned something, and if they continue to pursue web development, I hope their learning experience has helped them in their efforts. Keith D Commiskey https://keithdc.com COURSE DELIVERIES HTML, CSS and JavaScript in Reno From September 9th, 2019 to October 5th, 2019 Satu
Read more

In an attempt to spice up a navigation system I'm working on, I took to CodePen to experiment with some CSS-based 3D books on a shelf. Although I believe the books turned out pretty good, I dashed the effort in lieu of a more simplistic approach. That aside, figured I would share the books I came up with, primarily because web development projects are fun to share. Development Phases Bad Shelves Good Shelves Narrower Shelves Shelves with Taller Books (latest/most developed) Sources The base for this development effort was in part thanks to Intro to CSS 3D Transforms by David DeSandro . Although I completely overhauled and applied all types of modifications, David's examples provided the initial insights. Gradient lines for the edged faces on books is thanks to moz://a's MDN web docs . I originally tried a pseudo :after class for the shelf, but due to perspective incompatibilities, I ended up only using this for the soft blur between
Read more