on November 03, 2019
In an attempt to spice up a navigation system I'm working on, I took to CodePen to experiment with some CSS-based 3D books on a shelf.

Although I believe the books turned out pretty good, I dashed the effort in lieu of a more simplistic approach. That aside, figured I would share the books I came up with, primarily because web development projects are fun to share.

The base for this development effort was in part thanks to Intro to CSS 3D Transforms by David DeSandro. Although I completely overhauled and applied all types of modifications, David's examples provided the initial insights.

Gradient lines for the edged faces on books is thanks to moz://a's MDN web docs.

I originally tried a pseudo :after class for the shelf, but due to perspective incompatibilities, I ended up only using this for the soft blur between books. The pseudo class approach I tried was based on this Stack Overflow: Answer by jme11 with a Demo on Bootply

The more simplistic approach I took was with rotating just one plane, as opposed to animating 3, 4, 5, or 6 panes on each book as I was doing above. Yet as simplistic as they may be, I believe they turned out pretty good (for a non-designer). 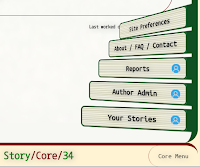 Well, I finally found a solid solution for this error (so far as I know for now). I tested this near 50 times and about 5 different ways.

I've read LOTS of message posts on this, and not one has suggested this. Although one came close by suggesting to leave a copy of MS Word open (if the problem is happening in Excel). Unfortunately, this problem has been known to happen in Word also.

My solution? Ready for it? Here it is...

Open the clipboard, and leave it open (but minimized).

How to open the clipboard? There should be a file in your system32 folder named "clipbrd.exe". Double-click it. Or, you might be able to "Run" (Win-R, or Start->Run) the "clipbrd.exe" command (minus the quotes).

Please note that this solution is primarily for anyone with this issue that isn't running the Get Right Monitor, or you're not running remote desktop (rdclip) and/or terminal services.

Blogger/Blogspot: Reverse the Order of Posts

With regards to blogs using the new template designer layout, and with the help of many Google results and the jQuery API documentation and its comments, I have figured out a way to not only reverse the order of Blogger posts, but reverse multiple posts made on the same day.
Use: I wanted my blog to read more like a journal or diary. Blogs tend to read more like news flashes, where the reader will read the most recent message posts first. So, it was necessary for me to find a way to reverse the order.
Consideration: Although I got this to work on my blog, I cannot guarantee it will work for yours... template layout differences, previous edits, and other potential differences between your blog and mine. You should consider using the below guide in how I did it as more of a guide for things to look at when attempting to implement this on your blog. Not to mention, I'm writing this in April of 2011, so two months, six months, a year or more from now and it may not even be relevant at a…

This message post isn't so much a complaint, although I do have those in this regard, as it is just something I learned that I thought to share, and who knows, perhaps I'm missing something.

We have DirecTV. Not by choice, but because the apartment complex we live in has a contract with them, so we basically don't have a choice. However, although we have DirecTV, for our area, DirecTV farms out our service to AT&T HE (AT&T Home Entertainment).

Wow! I was and still am bewildered. But again, perhaps I'm missing something... I can't find any news articles on this anywhere. Am I mi…

In my recent previous experience with both of these sites, my advice is to go back to getting out and doing things in life and meeting someone naturally. Below are my perceptions of using these two sites from a functionality standpoint. Please note however these observations/notes are as of the time of this posting, and cannot reflect any changes made since.

Match.com Although I don't have much feedback on Match.com, the primary issue I've found becomes quite time consuming and can even be downright disheartening, and that is with regards to the numerous fake profiles I came across. For me it's a bit easy to spot some of them because how many 28 or 29 year old girls are interested in a 46 year old man? "Maybe" one or two "somewhere" in the US but certainly not as many as I've seen on Match.com.

Other than that, I just never got any responses from around 30 messages sent. I really had no idea I was that unapproachable in that not even one person can …

AND, on top of a new job, and a new web host for kdcinfo.com, we (Michelle, Brittany, and I) are looking to put the house up for sale in the next month, and move back into an apartment (we just can't keep up with the maintenance (fees) required by this 1980 luxury home (still not quite sure how my folks did it). Perhaps we'll get another one when we can afford a newer model?...